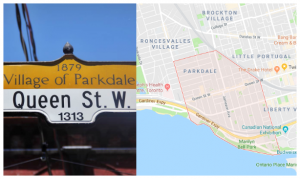 Parkdale’s eclectic mix of real estate options ranges from grand Victorian mansions to high-rise low rent apartment buildings. This plethora of housing options has resulted in Parkdale having one of the most diverse demographics of any Toronto neighbourhood.
The Parkdale neighbourhood possesses many positive attributes. It has some of Toronto's most vibrant shopping districts, wonderful tree lined streets, Victorian homes, and impressive mansions that remind onlookers that Parkdale was once Toronto's wealthiest district. Parkdale is also within walking distance of Toronto's waterfront parks.

The main commercial shopping area in Parkdale has historically been on Queen Street. This vibrant shopping district seems to be in a state of perpetual activity; it includes an eclectic mix of shops and restaurants.

The Roncesvalles Village shopping district, north of Queen Street, is the cultural centre of Toronto's Polish community. There are many outstanding food markets, delis, and restaurants along this route.

Parkdale's history began in the late 1800's when it was an elite residential suburb, that rivaled Rosedale as Toronto's most desirable address. Parkdale's popularity led to its incorporation as a village in 1878. Then in 1889, after many heated public debates, Parkdale's citizens voted in favour of amalgamation with the City of Toronto.

Parkdale, became Toronto's playground by the lake in 1922, when the Sunnyside Amusement Park and Bathing Pavilion opened for business on Parkdale's beaches. Sunnyside was the place to be and be seen for a generation of Torontonians.

In 1956, Sunnyside was shut down by the city in order to make room for the Gardiner Expressway and a revamped Lake Shore Boulevard. Unfortunately, these new expressways cut Parkdale off from the lake and its glorious past. The area then went into a period of decline. At present Parkdale is once again emerging as a prominent Toronto neighbourhood.

“Working with Howard was like working with a friend” He understood my family’s needs and didn’t let me get carried away with homes that were not suitable for us. When it was time to sell he was well-informed and strategic. … END_OF_DOCUMENT_TOKEN_TO_BE_REPLACED

“Managed Our Requests Very Well” I wanted to take a moment to send you a quick note regarding Howard and the services he provided to me in finding a house to rent here in Toronto. I am in the middle … END_OF_DOCUMENT_TOKEN_TO_BE_REPLACED

“BOUGHT and SOLD!” Dear Howard, We thank you very much for all the efforts you showed us during our house selling and buying processes. You did a great job to sell it and buy new one regarding our budget, preferences, … END_OF_DOCUMENT_TOKEN_TO_BE_REPLACED

“Howard Delivered” Howard was instrumental in the sale of our existing condo and purchase of our new home. When looking for a new place,we had very specific criteria and Howard delivered, helping us secure our dream home in the best … END_OF_DOCUMENT_TOKEN_TO_BE_REPLACED